With summer in full swing and holiday plans in motion, there is one dreamy destination travellers don’t miss on their must-visit list. Thanks to a coastline decorated with islands and beaches that dazzle in the sweltering sun, Croatia is the summer hotspot, especially if you trust the Adriatic Sea as your guide.

Whether you opt for a solo sailing vacation or choose a crewed yacht charter instead, Croatia’s best beaches are always within arm’s reach. But how does one choose between beaches that have been named Europe’s best or hidden gems unknown to the tracks of tourists?

Fortunately, you can visit them all. But these are our top 10.

There is a reason Saharun is a constant contender for Croatia’s best beaches, and with just one glance at this cerulean paradise, you’ll know why. Located at the north-western end of Dugi Otok, the last in a series of islands in the Zadar archipelago, Saharun’s breathtaking Caribbean-like sea has even been praised by some of the biggest British media. Boasting pearly white sand and an 800-meter-long shoreline, Saharun is protected by a long bay, resulting in pleasant swimming temperatures all summer long. Enveloped by pinewoods that promise shade on a warm day, this summertime oasis is enhanced by only a few beach bars where you can cool off and recharge. But you shouldn’t expect any more action than that.

Positioned at the foot of a cliff between the towns of Makarska and Tucepi, the isolated Nugal beach is the jewel of the Makarska Riviera and a go-to for naturists. Far easier to reach by sailboat than the 30-minute rocky terrain walk from town, the once-secret Nugal is gaining popularity, and just last year, it was named one of the best beaches in Europe!

Because nearly all best beach lists in Croatia include the one-and-only Zlatni Rat (Golden Horn), we thought we’d add a lesser-known Brač Island beauty to the mix - Lovrečina Bay. Located between the towns of Postira and Pučišća, Lovrečina beach is set in a deep forested bay, famous for a sandy bottom that runs almost 100 meters. Lovrečina is perfect for those looking for a low-key beach day in the presence of picturesque views, no matter which way you turn. You can also explore the remains of an early Christian Basilica and ancient Roman summer villa nearby!

Saplun beach is located on an island of the same name near the better-known southern Dalmatian Lastovo archipelago. An uninhabited island that belongs to the lower shores of Lastovnjaci, Saplun impresses not only because of its beauty, but because it is the only sandy beach in the Lastovo archipelago. Quite a rare occurrence for islands surrounded by the open sea! The dense forest offers shade to sun-kissed swimmers who won’t be bothered by the noise of popcorn machines or ice cream carts, as Saplun is entirely free of beach content.

Located on the southern coast of Hvar, it’s no wonder why this Vogue-approved beach is on our list and so many others. The allure of this pebbled paradise is heightened by the Kasandrić family summer villa, dating back to the 19th century, and a traditional konoba-style restaurant where you can delight in freshly caught fish and local wine while gazing into the turquoise abyss.

Europe’s best beach in 2016 is also a bucket-list destination for anyone on a sailing holiday in Croatia. Located on the southern part of Vis Island, Stiniva beach sits in a bay of the same name, though hardly visible thanks to its tall rocky surroundings, which also provide natural shade for beachgoers. Because it isn’t the most accessible beach to reach, Stiniva has managed to preserve its natural beauty - but it is only gaining popularity with each passing summer.

Pasjača is yet another award-winning Croatian beach, located in the small village of Popovići, about 30 minutes from Dubrovnik. Tucked beneath sharp cliffs, Pasjača boasts fine sand-like pebbles and unobstructed sea views; a natural bliss further amplified by zero amenities.

Located just off of Vela Luka on Korčula Island, you cannot go wrong by choosing to swim on Proizd. With a few bathing areas to choose from, the island offers natural white stone slabs that act as swimming platforms for easy access into the sea. Dense forest covers the area behind you, and while the island is uninhabited, you can find one restaurant open in the summer only!

Named after the Latin word for ‘sand,’ Saplunara cove is a hidden gem of Mljet island, located on its south-eastern coast. Because the cove itself measures around 1 kilometre, Saplunara is split into two beaches - big and little Saplunara. Ringed by an Aleppo pine forest, fine white sand covers this isolated cove, and the natural world thrives. Legend has it that Odysseus found sanctuary here, too!

Oprna is located in a secluded bay near Stara Baška, on the ‘island of Blue Flags,’ known for its outstanding sea quality. Often revered as one of the most beautiful beaches in the southern part of Krk Island, this natural pebble and sandy beach is so off the beaten path, it is best reached by sailboat. While visitors can rent deck chairs, umbrellas, and enjoy a small beach bar here, the idyllic location will make you feel as if you’re the only one around.

Get inspired by browsing through our website to book your 2021 Croatian sailing adventure or contact us to learn how we can help plan your perfect sailing holiday. 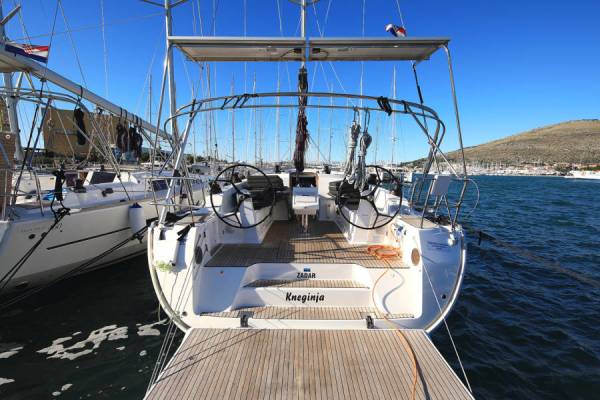