The Croatian Adriatic is famous for many things, most of which you’ll get to experience on your Croatian sailing holiday. And while over 1,000 islands sit in the spotlight time after time, we’re diving a bit deeper into the nautical world and celebrating our friends submerged below the sailboat.

It’s no surprise that you may encounter some fishy friends while scuba diving or snorkeling in a luminous bay, but you’ll want to know a bit more about these aquatic animals, especially once they’re on your plate during a sailing seafood feast.

As a way to prepare you (and your taste buds) best before sailing Croatia, we’re here to educate you on the finest Adriatic fish you won’t want to miss.

A fish that has many names must come with celebrity status, and whether you choose to call it John Dory, St. Pierre, or keep it local with Šanpjer, you soon will see why it has the genes of Zeus. While it technically only boasts the genus Zeus of dory fish, John Dory has been hailed by gourmands for hundreds of years - even though it isn’t the most attractive fish at first glance. But if you can get past its long spines, sharp scales, oblong compressed body, and greyish-green color, you’ll be rewarded with one of the best delicacies the Croatian coast can offer. Though this no-frills fish is best lightly grilled and drizzled with olive oil, if it’s the daily catch at a restaurant you visit on your next sailing vacation, be prepared to pay a pretty penny.

Škarpina is a white fish that ranges in color from pink to red, decorated with brownish spots covering its body. While its venomous spines may put you off, this fish can be safely eaten when they’re removed - and we promise the delicate meat you’ll find inside is worth every bite. Mostly used in Croatian cooking to prepare broths or fish soup, Škarpina is also enjoyed baked, with potatoes, as the tender and juicy meat soak up every drop of homemade olive oil.

A predator, persistent hunter, and excellent swimmer, Zubatac is one of the most sought-after Adriatic fish, that is, next to sea bream. Known in Croatia as the 'emperor of fish' thanks to its tasty meat, Zubatac is found mostly around the towns of Šibenik  and Zadar, and the islands of Vis, Lastovo, Mljet, and Palagruža. Zubatac is usually prepared in the oven with potatoes and few other ingredients, owing to this already flavorful fish!

Let’s be honest -  this Adriatic fish wouldn’t jump out at you at any market for its looks, as its name pays tribute to its ugliness in the Croatian language. While its gaping mouth resembles more of a frog than a fish, Grdobina has still found its place in Croatian cooking - and for that, we are grateful. Since this fish is known to have few bones, it is frequently the star of  gregada fish stew enjoyed in the Dalmatian region, and mostly on your sailing route to the island of Hvar. Don’t let its bad looks fool you!

This dark chestnut, almost black-colored fish can grow up to 1.40 meters and 100 kilograms! But you won’t be eating any that big in Croatia, as the average hunting weight is around 7 kg. Tastiest when youngest, Kirnja is a favorite fish used in brujet or Dalmatian fish stew that usually uses three different types of fish, flavored with onion, garlic, olive oil, tomatoes, and of course, wine.

Tuna is no stranger to the Adriatic, with a tuna fishing tradition that dates back to the 5th century BC! Atlantic Bluefin tuna is dominant in the Adriatic and is most popularly fished in the Zadar area. Since the tuna fishing season lasts from February 15 to December 31, tuna is enjoyed most of the year along the Adriatic Coast. On your next yacht charter, you’ll likely have it lightly seared with olive oil, seasoned with salt from the sea.

Found in warmer waters, Gof is a relentless predator that grows up to 180 cm in length and 80 kilograms in weight, though, in the Adriatic, you’ll find them just over 50 kilos. A high-quality Adriatic fish with a high percentage of protein and a low percentage of fat, Gof can be thrown onto the grill, into a brujet, or most interestingly used as a meat substitute in the Dalmatian classic pašticada! No matter which way you choose, you’ll quickly learn that this rich and buttery fish is a culinary treat.

A blue Adriatic fish full of omega-3 fatty acids is always a good idea, especially when it tastes as good as Skuša. The mackerel season begins in the spring and lasts until early summer, and you can eat this fish all season without boring your taste buds as it can be prepared in various ways! Whether floured and fried, used in a broth, or baked in the oven, you’ll also find that Skuša won’t break your bank!

Looking to book your next Croatian sailing vacation around eating the best Adriatic fish? Contact us to find the best charter option for you and your group! 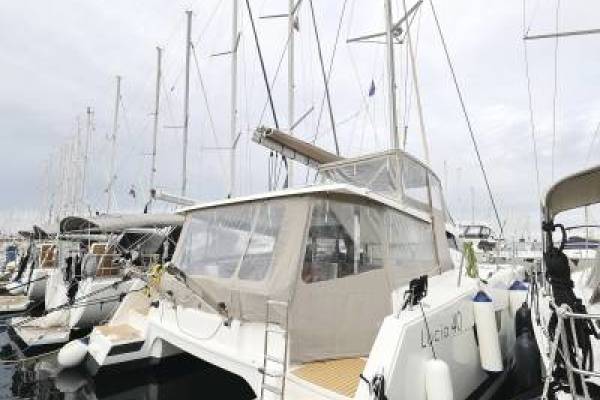